“And the winners are…” 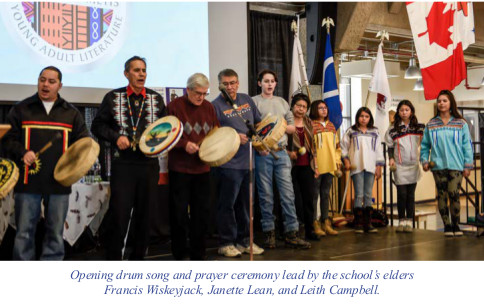 Every year since 2013 three Young Adult (YA) novels written by First Nations, Inuit and Métis authors have received CODE’s Burt Award. This year the Award Ceremony took place at the Amiskwaciy Academy, an Indigenous high school in Edmonton, Alberta, Canada. On November 23, 2017, over 200 students, teachers and special guests participated in the celebration of authors and books. Principle Fred Hines, the teachers and the students were fantastic hosts.

This year’s award recipients are: Katherena Vermette (Manitoba) for The Break, Aviaq Johnston (Nunavut) for Those Who Run in the Sky and Susan Curie (Ontario) for The Mask that Sang.

“It is inspiring to see so many young people enjoying books and celebrating reading. The guaranteed book purchase by CODE, which is part of the award, means that we know great stories are being given to young people who are eager to have them,” said CODE’s Program Manager, Lynn O’Rourke. 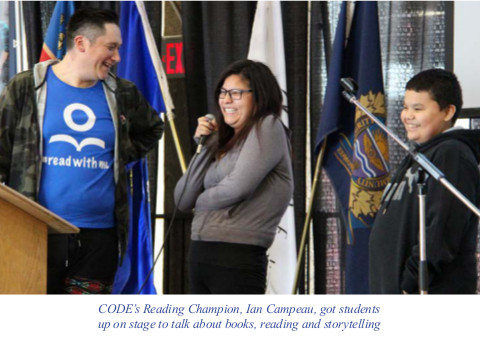 Katherena was not able to attend the award ceremony but sent her thanks in an acceptance speech. She wrote: “Through the course of writing this novel I never thought of it as a YA book, but young people are often far more astute than we old folks ever give them credit for. I have been surprised at the response in readership from young people, and I thank them for their love and well wishes.”

Aviaq was in Edmonton to receive her award and told us more about where her inspiration comes from. “Most of the
stories I grew up with were about mythical creatures, and there are many of them in my story because they’re scary – Inuit legends are typically very scary stories. I love integrating these stories into my own. As a young adult, I found I didn’t really like writing for school or for other people, but I loved writing for myself. And when I switched from writing about teenagers who lived in cities to teenagers who lived in the Arctic within small towns, my stories had more meaning – for me and for the readers,” said Aviaq. While in Edmonton, she also spent several days sharing her love of reading and writing with young people at youth centres and correctional facilities around the city.

Susan also attended the award ceremony in Edmonton and brought a very special guest with her. Susan said, “I am an adopted person, and several years ago I learned about my Cayuga heritage. It took a bit of work and perseverance but I eventually connected with my family. My experience inspired The Mask that Sang. Today, I am proud to have my aunt, my mother’s sister, here with me to celebrate this achievement.” 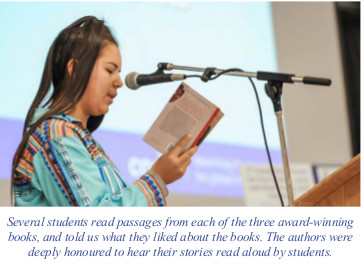 CODE’s Burt Award for First Nations, Inuit and Métis Literature is a Canadian literary award and readership initiative that recognizes excellence in Indigenous-authored literature for young adults ages 12-18. The award is a cash prize given annually to three English- language literary works for young adults written by First Nations, Inuit and Métis authors. Publishers of the winning titles are also awarded a guaranteed purchase of up to 2,500 copies of each title. These books are then distributed at no cost to schools, libraries, community centres and friendship centres across Canada. The distribution program ensures that Indigenous youth across Canada have access to great reading material.

The Burt Award for First Nations, Inuit and Métis Literature is made possible with the support of the Literary Prize Foundation along with the advisory council comprised of the Assembly of First Nations, the Métis National Council, Inuit Tapiriit Kanatami, the National Association of Friendship Centres, Frontier College, GoodMinds, the Association of Canadian Publishers and the Canada Council for the Arts, and their newest partner, the National Reading Campaign. 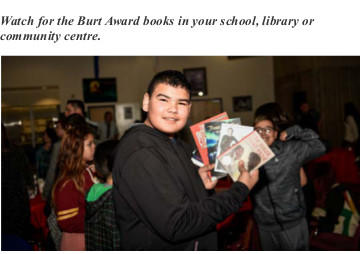 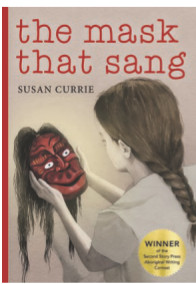 The Mask that Sang, written by Susan Currie, is about a young girl named Cass who discovers her Cayuga heritage when she finds a mask that sings to her. Cass learns she had a grandmother, who has just died and has left her and her mother the first house they can call their own. But with it comes more questions than answers: Why is her Mom so determined not to live there? Why was this relative kept a secret? And what is the unusual mask, forgotten in a drawer, trying to tell her? Strange dreams, strange voices and strange incidents all lead Cass closer to solving the mystery and making connections she never dreamed she had. Young people ages 12-15 will enjoy this gentle story about race, culture, family and friendship.

Currie is a winner of Second Story Press’ Aboriginal Writing Contest, resulting in The Mask That Sang, which is her second book. Her first book Basket of Beethoven was a finalist for a number of awards. Currie has an MA in Children’s Literature and has been an elementary school teacher for 17 years. She is an adopted person who later learned about her Cayuga heritage, an experience that inspired her book. Currie currently lives in Brampton, Ontario, Canada, with her family. 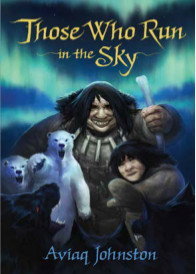 Aviaq Johnston is a young Inuk author from Igloolik, Nunavut. She is a writer, a teacher, a world traveler and a fantastic storyteller. She works at Nunavut Sivuniksavut in Ottawa, Ontario, Canada, a unique college program serving the needs of Inuit youth across Canada. She spends a lot of her time reading, writing, studying and, she says, procrastinating. She goes back and forth between Iqaluit, Nunavut, and Ottawa, Ontario, Canada.

Those Who Run in the Sky is a coming-of-age story that follows Pitu, a young shaman who finds himself lost in the world of the spirits. After a strange and violent blizzard leaves Pitu stranded on the sea ice without his dog team or any weapons to defend himself, he soon realizes that he is no longer in the world that he once knew. The storm has carried him into the world of the spirits, a world populated with terrifying creatures. Pitu must master all of his shamanic powers to make his way back to the world of the living, to his family and to the girl that he loves. This is a great adventure story for ages 12-18.

Those Who Run in the Sky is Johnson’s debut novel which followed her rst ever picture book What’s My Superpower? In 2014, she won first place in the Aboriginal Arts and Stories competition for her short story “Tarnikuluk,” which also earned her the Governor General’s History Award. 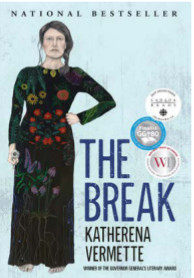 Katherena Vermette is a Métis writer from Treaty One Territory, the heart of the Métis nation in Winnipeg, Manitoba. The Break (her first novel) is a beautiful and powerful story that captures the love and struggles between family members in a modern Indigenous community. The Break shows the resiliency of Indigenous women and the unwavering power of family love. In this story the main character, Stella, is a young Métis mother who looks out her window one evening and sees someone in trouble on the Break – a barren field on an isolated strip of land outside her house. She calls the police to alert them to a possible crime. In a series of changing narratives individuals who are connected with the violence – police, family and friends – tell their personal stories leading up to that fateful night. Through their perspectives, a larger, fuller story is told about the lives in this community and the effects of trauma. 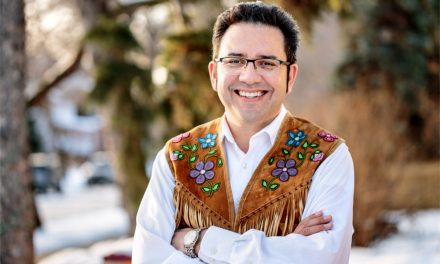 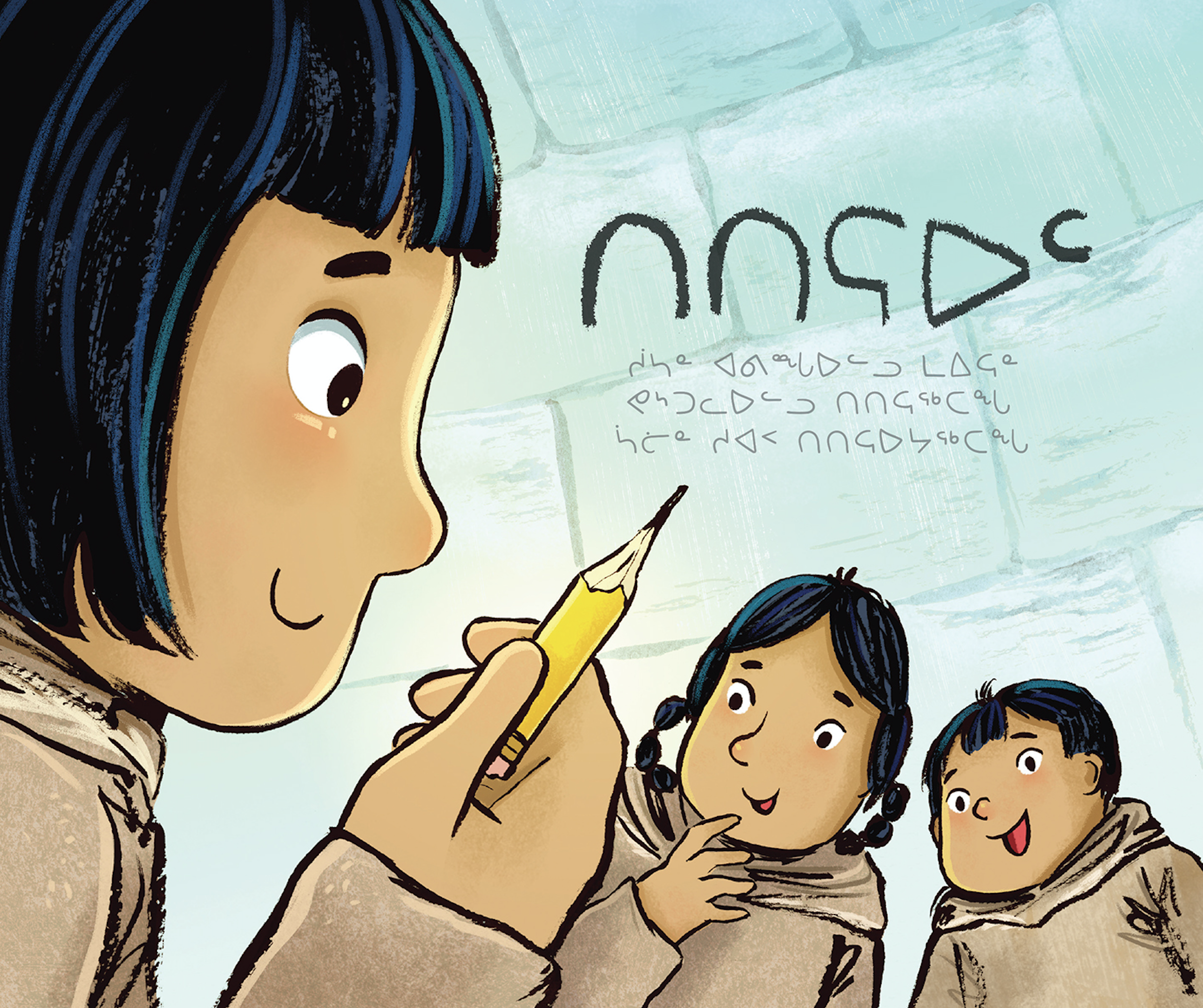