An award-winning multidisciplinary artist from New Brunswick, Tara Audibert has built a successful career in the animation industry that spans over two decades. She is an accomplished children’s book and comics illustrator, and recently launched her first animated series on APTN called Lil Glooscap and the Legends of Turtle Island, which she created, produced and directed. As the owner of Moxy Fox Animation Studio—an animation, comics and illustration studio located in Red Bank First Nation, New Brunswick—she hopes her work will inspire other Indigenous artists to emerge and tell their stories through illustration and digital media. 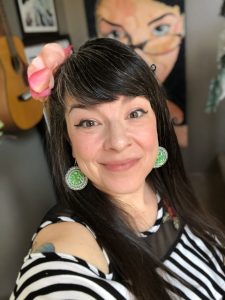 Audibert is of Wolastoqiyik (from Tobique First Nation) and French heritage. She combines traditional First Nations art and storytelling with contemporary design to create projects that are both entertaining and educational. In her efforts to preserve Indigenous history and language, Audibert is part of a not-for-profit organization called the Ni’gweg Collective—a gaming and animation collective that aims to tell stories in new ways guided by Indigenous oral tradition. In her role as President of the Ni’gweg (meaning growth) Collective, she (and other Indigenous creators) animates short stories told by Indigenous Elders in Wolstoqey and Mi’kmaq, creating a library of resources for sharing and learning.

SAY Magazine recently had the honour of interviewing Audibert. Keep reading to find out more about her life and how she’s built a successful business and career in animation.

SAY: Tell us more about you, your family and where you grew up.
Audibert: I grew up in Saint John’s, New Brunswick. My mom is Wolastoqiyik from Tobique FN and my dad is French. They got together in the ’70s during a time when an Indigenous woman married a non-Indigenous man meant they would lose their status. They were just so in love. My mom moved off-reserve and, as a result, she was ostracized by her family. It wasn’t until I was born—the first grandchild—that they reached out and reconnected, and finally accepted my father.

SAY: Have you always wanted to be an artist?
Audibert: From the time I was quite little, I remember always wanting to be an artist—I loved drawing. My parents also consistently told us that we could be anything we wanted, and I really hung on to that. But, when I was in high school, my parents challenged the idea and brought up the topic of money and the “starving artist” forecast, so I decided I would become a marine biologist and do art on the side. I took my Bachelor’s of Science at university and tried to do everything my parents said I should do, but it was such a far swing that I really didn’t do well. I took some time off, and even worked in sales and as a loans officer.

SAY: So what spearheaded your career in animation?
Audibert: It was my aunt that found out about an animation program in Miramichi where I lived. Since we saw so much animation on TV, we figured someone must be making money! I remember thinking, “This must be the art that makes money so I’ll do that!” I grew up on Warner Brothers and Scooby Doo, and watching Saturday morning cartoons with my mom. There was no option to record shows at the time, and many of my family members could recite those Warner Brothers animated skits over and over—it made the idea of being an animator very appealing. So I went to school and did really well, and went on to work in animation in Halifax, Nova Scotia. I worked my way up from clean-up crew to lead animator, working 14-hour days.

SAY: When did you decide to start your own business?
Audibert: Being an animator turned out to be quite physically demanding, and I ended up getting tendonitis in my arm and wasn’t able to draw at that rate anymore, which I had done for nearly 10 years. I began teaching at the animation school that I went to in Miramichi, and there was a point when I was helping students make short films. I was actually so inspired by what I saw. I decided I wanted to do animation full-time, and I was fortunate enough to get a grant that allowed me to create my first short film, The Importance of Dreaming, and subsequently start my own business, Moxy Fox Studios.

SAY: How does your life inform your work?
Audibert: The majority of my work is drawn from things that have happened in my life, and when I do animation, I think of the people in my life, especially my siblings because I watched them grow up. I use those experiences to create my characters, how they look, how they act and what they do. The story of my parents was the inspiration for my first film, The Importance of Dreaming. I wanted to tell this story as a modern-day Indigenous story that all ages could relate to, so I did it as a cartoon. It is about the love between a red fox and a white owl, and everyone thinks it’s “weird.” What happens throughout the film is what happened in my life—the story of my parents, about me and my siblings being born, and bringing the family back together.

SAY: Tell me about producing your first TV show on APTN.
Audibert: I believe I am one of the first, if not the first, female Indigenous animation producers to create, direct and write all episodes of a show. The show Lil Glooscap and the Legends of Turtle Island is the first animated show to be in Wolastoqey as well as English and French. I took the legends of Glooscap, a famous figure in Wabanaki culture, and created a show for kids. The original stories are intended to be warnings and are quite graphic with some concepts that require major explanation, so I wanted to create something that kids would like and understand. I wanted to tell a version of the stories that I knew and grew up with. My stories, however, are all made up— there’s not much from the actual legends of Glooscap other than hinting towards these legends. I wanted to create prequels to set the stage for what happens later on because of what Glooscap learns as a child. In the original legend, Glooscap was born an adult, his mother dying during his birth, which is why his grandmother is the matriarch in his life. In my animation series, his grandmother Meme Muwin is his caretaker and teacher, teaching him how to use his gifts in the best way to be a great leader for the people of Turtle Island, the Wabanaki people. The story takes place before people were around, on Turtle Island, which is small but growing, and it follows Glooscap, his mischievous twin brother Malsum and a group of friends who go on adventures, solve problems and learn how to use their gifts.

SAY: What is the most meaningful project(s) you have worked on?
Audibert: While I was teaching, a friend of mine, Brandon Mitchell, wrote a story about residential schools and he asked me
to illustrate the comic for it. The comic is called Lost Innocence, and it was such an important story that came at a time when I was first learning about what really happened at residential schools. That’s what got me into illustrating comics. And, of course, Lil Glooscap and the Legends of Turtle Island is the first large series that I have written, directed and produced, and I am so proud to have that playing on APTN where all of Canada can see it. There was so much work put into it, and I worked with so many incredible and talented artists who were working from different locations all over the world. The whole production was  created during the pandemic, which at the time was really new—we didn’t know if it was going to work.

SAY: Talk about the importance of having Indigenous representation in your industry.
Audibert: There was a time in my life, not so long ago, when I was on a list of just 10 female Indigenous comic illustrators in all of Canada and the United States. I was shocked that I was on a list, but even more shocked that there were only 10 of us. There should be so many more Indigenous People out there telling their stories, exploring the storytelling side of our culture in some visual way. The impact of residential schools is particularly important in this regard because there was no culture, no
art for us to look at or emulate. There were no cartoon characters for us to see or relate to. There needs to be more representation—more Indigenous People illustrating and telling the stories. The only way to do that is to see others doing it. I didn’t have Indigenous role models in the industry, or Indigenous female directors or producers to follow, because there weren’t any at the time. There are more now, but there is still a great need for Indigenous animators, illustrators and storytellers. I am hoping I can help others find their way in this industry by showing them the path.

SAY: What new projects are you working on?
Audibert: I am working on pitching my next TV show called Strong Women, which is a futuristic look at an Indigenous matriarchy ruling an entire planet, and what that looks like as an animated show. I see it as a show to empower young girls—there’s no concept like it.

Danielle Vienneau, Editor-in-Chief with SAY Magazine, believes in the power of sharing positive stories to inspire greatness in others. To submit your story, email editor@saymag.com. 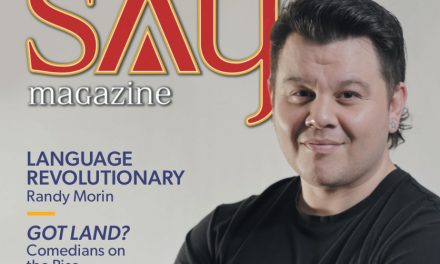 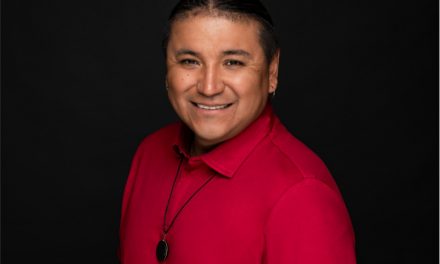